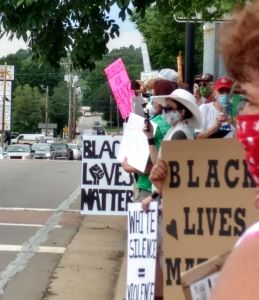 On Sunday, June 14 people gathered to demonstrate in support of the Black Lives Matter movement.  A mix of young and old, black and white, men, women and children turned out protest racial inequality and injustices in policing, education, healthcare and many other areas.  The most recent incident that has stirred such protest was the police killing of George Floyd, an unarmed black man in Minneapolis on May 25th.  His death at the hands of police is the latest in a long list of such killings; Eric Garner, Philando Castile, Tamir Rice, Michael Brown, Breonna Taylor.

Local law enforcement, led by the Cheatham County Sheriff’s Department, was a substantial presence and handled the demonstration efficiently and professionally.  Their presence was greatly appreciated.  Many thanks to Sheriff Breedlove.

There was a small, vocal group of counter protesters across the street who yelled, blew horns, revved engines and waved confederate flags.  The BLM supporters were undeterred and resolute in maintaining civility and peace.  Officers gave escort to individuals back to their cars so they could avoid harassment by the counter protesters.

The event was a powerful showing of solidarity in support of Black Lives Matter.  Further demonstrations may be planned.