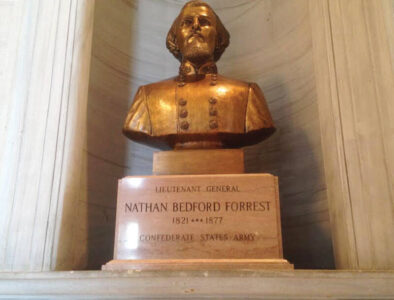 The bust of Nathan Bedford Forest remains in the Tennessee State Capital building.  Yes, it is part of history to be remembered (and not repeated) but not to be celebrated.

Nathan Bedford Forest was a General for the Confederacy and then later became then first Grand Wizard of the KKK from 1867-1869.  He is also infamous for the Fort Pillow Massacre.  His soldiers slaughtered African American Union soldiers as they were surrendering at Fort Pillow in Henning, Tennessee in 1864.

The bust of Forest was installed in the Tennessee State capital in 1978.  He is the only person who was not elected to any office to be honored with a bust in the capital.

This symbol of racism has no place in a state owned , tax payer funded state capital.  It is a part of the past that belongs in a museum, if anywhere.

You can send emails to the members of the Historical Commission who will have the final vote on whether the bust stays in the Capital, or is removed.  Here is a direct link to a site that allows you to send emails to all Commission members at one time.  Please help us remove this symbol of white supremacy from our state capital.